I'm a Scientist: Supported by Wellcome and UKRI
Skip to content

About I’m a Scientist

I’m a Scientist is like school science lessons meet the X Factor! School students choose which scientist gets a prize of £500 to communicate their work.

Scientists and students talk on this website. They both break down barriers, have fun and learn. But only the students get to vote.

This is the Stem Cells Zone. It has a range of scientists studying all different topics. Who gets the prize? YOU decide!

During pregnancy, the foetus will have a lot of stem cells. This is because the baby is growing, and building its body parts, and all body parts are made up of cells; arms, legs, ears, eyes, hearts, kidneys, etc. The cells which make up these parts all start out as stem cells. As we grow, we have fewer stem cells; this is because we have less need to grow new body parts. Some scientists think that stem cells are what starfish use to grow new limbs if one is severed. 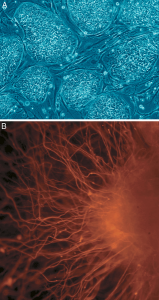 There are two main types of stem cells:

Most research done using stem cells takes them from either mice or humans. When a woman is struggling to have a baby, she might undergo a treatment where embryos are taken out, and fertilised outside the body, before being put back in for the foetus to grow. Once this treatment is over, and the woman has had her baby, there are often embryos left over which may be used to obtain stem cells. The removal of the stem cells however, destroys the embryo. Some people see the unfertilised embryo as a potential human life, and so say this procedure is similar to an abortion, which is from where some controversy around stem cell research comes.

Teachers don't need to book, and students are free to drop in and talk to the scientists.. If they have any burning questions or haven't yet experienced a live chat.